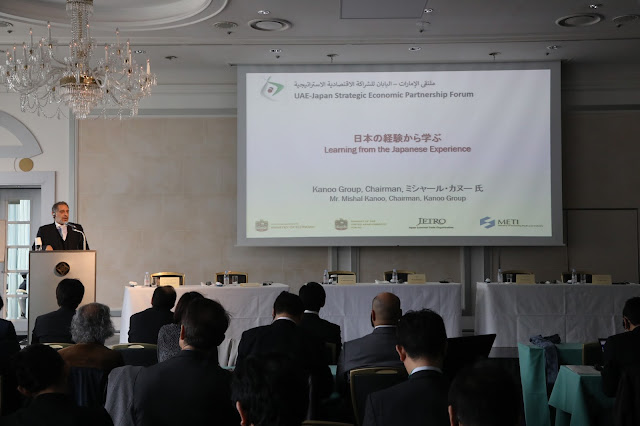 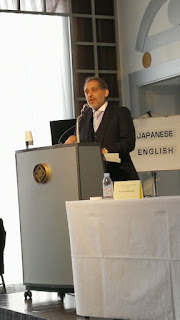 In cooperation with the Department of Economic Development – Abu Dhabi and the UAE Embassy in Tokyo, the official mission was organised in line with the Ministry’s efforts to further strengthen bilateral relations between the two countries and to explore investments opportunities.

The program kick-started with a message about ‘The Impact of Abenomics on Japanese Economy and its Issues,’ addressed by Mr. Atsushi Nakajima, Chairman, Research Institute of Economy, Trade and Industry (RIETI). It was held at Japan External Trade Organization (JETRO), a Japanese government-related organization that promotes mutually beneficial trade and investment relations between Japan and other nations.

The highlights of the mission consisted of business meetings, networking and match-making as well as arranged company meetings and site visits. These sessions aim to discuss ways to enhance mutual cooperation between the business sectors.

During the presentations of UAE companies, Mr. Mishal Kanoo delivered his keynote speech titled, “Learning from the Japanese Experience.” In his message, he stressed his admiration to the Japanese key attributes such as hard work, honesty, cleanliness, excellent work ethics and efficient environmental policies, among others, which are vital qualities towards partnership.

He also introduced The Kanoo Group and possible expansion opportunities. Furthermore, he gave emphasis on reinforcing The Kanoo Group’s partnership and economic relations with its Japanese affiliates. At present, The Kanoo Group is a joint venture partner of the Japanese giant, Mitsui O.S.K. Lines, Ltd, one of the world's largest global multimodal transportation companies.

One of the highlights of his trip was a meeting with Ms. Yuriko Koike who currently serves as the governor of Tokyo, the city's first female governor, and previously the Minister of Defense in the cabinet of Prime Minister Shinzō Abe.

Additionally, Mr. Mishal Kanoo along with Mr. Mahmood Mian personally met Mr. Yoshiyasu Fujiwara, President of TLV Co. Ltd., one of the world’s leading manufacturers of steam engineering products. For over 20 years, Kanoo Oil & Gas, a member of The Kanoo Group has been representing TLV as one of its product principals.
Kanoo, as part of the UAE delegation visited the Tokyo Port, one of the largest Japanese seaports, and one of the largest seaports in the Pacific Ocean; the Mori Building Company, a Japanese leading property management firm established in 1955; and the FOODEX JAPAN 2018, Asia's leading international food & beverage trade show, and other top Japanese firms.

Lastly, Mishal Kanoo expressed his desire for potential future partnerships in areas of development in various sectors/divisions of The Kanoo Group across the Middle East.

© Copying of part or all of the contents in any form is prohibited. You may recopy extracts from these pages, provided that (1) You acknowledge The Kanoo Group Blog as the source of the material; and (2) Send an email permission to the Author.
at March 22, 2018 No comments: Links to this post