Come and see our products and services for power and industrial projects, in collaboration with our Principals: Ecodyne (Heat Exchangers), Pathway (Diverter Dampers) and Safetech (Expansion Joint Specialist).

Dubai, UAE: Kanoo Shipping won the Ship Agent of the year for the second year in a row, at the recent Seatrade Maritime Awards, the leading Maritime Award program for the Middle East, Indian Subcontinent & Africa. The event was held on 22nd September 2019 at the Madinat Jumeirah in Dubai, UAE.

The 2019 Seatrade Maritime Awards revealed Kanoo Shipping amongst the twenty-two winners from various categories before the crowd of powerful industry players. The winners were awarded for their extraordinary contribution to the development of the regional maritime sector. They were meticulously selected through a panel of judges consisting of CEOs from top maritime organisations and some of the region’s most influential personalities. 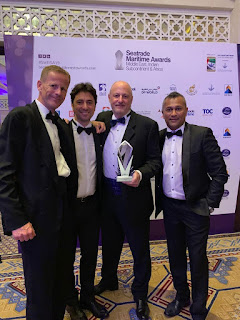 Jonathan Bygrave remarked, “We are honoured to be chosen as the best Ship Agent in the Middle East, Indian Subcontinent & Africa for two consecutive years. This means that our efforts to provide the best value to our customers and to constantly improve have paved a way towards this success.”

“I would like to congratulate Kanoo Shipping for another outstanding performance this year and for raising industry standards always in demonstrating their commitment to excellence,” said Fahad Kanoo, CEO of The Kanoo Group (UAE & Oman) and President of Shipping and Logistics, YBA
Kanoo.

The Seatrade Maritime Awards is the largest networking event for the region's maritime industry leaders and influencers. It is a celebration of quality and industry-leading credibility, which brings forward companies that are keen to share their accomplishments and successes throughout the year.

Kanoo Shipping, a member of The Kanoo Group, is the largest regional shipping agency in the Middle East which operates in 20 countries and all principal ports and offshore tanker loading terminals around the Arabian Peninsula, including Iraq.

Furthermore, Kanoo Shipping handles over 20,000 ship calls every year through its professional network which covers all ports in the Suez to Sri Lanka range and East/South Africa and recently has launched operations in India. The new agency office in Mumbai, Kanoo Shipping India, will allow Kanoo Shipping to have complete port coverage in India.

Health Fair held at The Kanoo Group HQ in Dubai 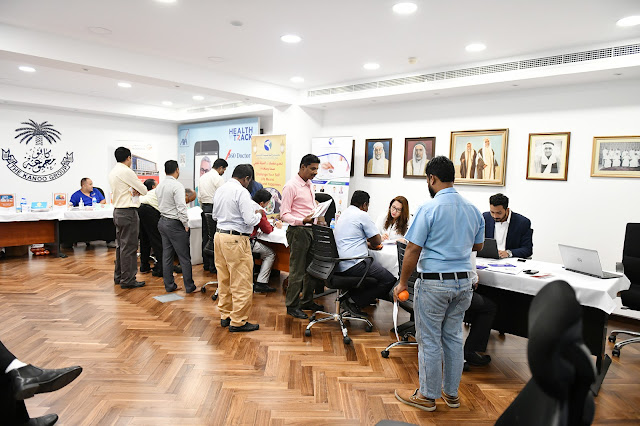 Dubai, UAE: Employees across The Kanoo Group Bur Dubai Head Office participated in the recent Health Fair programme held at its premises on 2nd October 2019 organised by HR Department, in collaboration with AXA Gulf, Prime Medical Center and Al Mariya Polyclinic.
Members of The Kanoo Group including staff and management were all encouraged to sign up for the screenings to make sure their health gets the attention it deserves.
Ms. Maha Kanoo, Head of Marketing & HR who fully supported this HR initiative said, “When you’re healthy, you’re happy, productive and fulfilled. As a thoughtful employer, we have brought these screening services right to our employee’s workplace.”
Mr. Mohammad Tariq, HR Manager UAE & Oman, further said, “We are happy to see a good turnout of health conscious staff today and hope to see similar response to future events”.

The screenings conducted at The Kanoo Group Health Fair were: BMI, Random Blood Sugar, Blood Pressure, GP Consultation, Body Composition Analysis, Dental, Onsite Activation of 360 Doctor, as well as Onsite Enrolment to Shield 4 Diabetes.
“Through these screenings, we can identify the risk of health problems before they have a chance to get serious. We benefit from advice on a healthy diet, stress management and more. For staff who are suffering from Diabetes, it was an excellent opportunity to enroll themselves for “Shield 4 Diabetes,” one participant commented.
Another employee added, “One of the most interesting features of the event was the “360 Doctor”, an app based 24 x 7 online facility for Doctor’s consultation and free doorstep delivery of medicines. These details and more were provided during the Health Fair by the AXA team.”

Complimentary Cholesterol Screening Vouchers were also given to all participants during the event which can be redeemed at any of the Prime Medical Centers.
“These check-ups were scheduled on separate dates and locations to accommodate other staff in other premises of The Kanoo Group. We shall be announcing a separate date for our staff based in Abu Dhabi. However, they are free to come and visit any of our next schedules if they wish so,” Tariq informed.
The next screenings will be on 16th October 2019 at Al Quoz Machinery Office in Dubai, and on 20th November 2019 at the Kanoo Travel Karama Office.