An Evening with John Cleese concludes a Successful Show

Dubai, UAE: John Cleese brought his hilarious performance back to Dubai for the second time after the success of last year’s show. The recent event, “An Evening with John Cleese” held at Madinat Theatre, Souk Madinat Jumeirah on 5th to 9th November 2013 was another impressive sold-out-ticket crowd. This brilliant entertainment with the comedy legend was again presented in partnership with The Kanoo Group.

The show was basically the same show as before except that it was more polished and more personal, plus a session on Question and Answer where he challenged his audience not to ask anything overly polite of rudimental. He became most engrossed when asked about how he felt about losing his role as Q in the Bond films.

John Cleese didn’t fail to stop the crowd from laughing so hard from every bit of his funny lines. As the event sponsor, Kanoo family and other management staff of The Kanoo Group also gathered in the show to witness the comedy legend.

Cleese did well both in sports and academics, but his real love was comedy. Several of these comedy reviews were met with great hit. Now aged 74, John Cleese with his usually poker face, clipped middle class accent extended his humour often involving ordinary people in ordinary situations, behaving absurdly for no obvious reason. He once explained that the origin of his fondness for black humour was the only thing that he inherited from his mother.

During the show, he shared his extraordinary life experiences like the time when he attended the funeral of a fellow Python Graham Chapman where his speech had funeral goers laughing uncontrollably, among others.

Beside his infamous character as a sharp-tongued, rude and clumsy yet somehow lovable proprietor of an English seaside hotel in the legendary TV series, “Fawlty Towers”. He rose to prominence with his BBC radio series as a writer and eventually collected to be a talent for his own program, “Monty Python’s Flying Circus” which displayed a strange and completely absorbing blend of low farce and high-concept absurdist humour, and remains influential to this day.

When asked about what he thinks of Dubai, his answer was, “Unique - a bit like Vegas. But with flashes of good taste”, he answered. 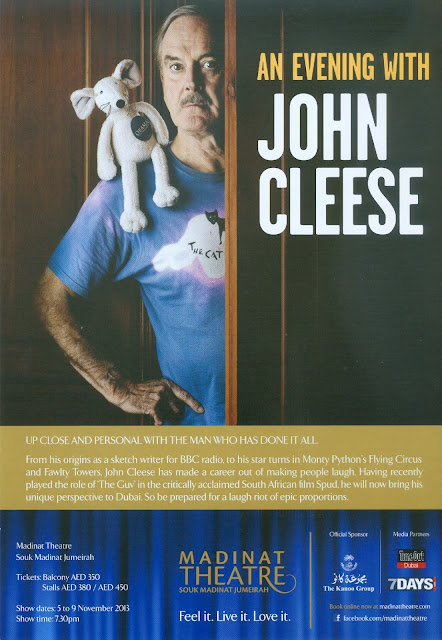