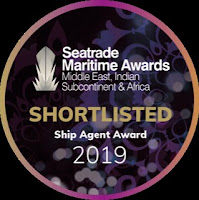 Dubai, UAE: Kanoo Shipping is nominated as one of the finalists for the 2019 Seatrade Maritime Awards. The leading Maritime Award program for the Middle East, Indian Subcontinent & Africa will be held on 22nd September 2019 at the Madinat Jumeirah in Dubai, UAE, where the final winners will be announced.


Kanoo Shipping has been shortlisted for the ‘Ship Agent Award’ under the Industry Awards Finalists. Entries from over 120 entries covering 20 countries were meticulously selected through a panel of judges consisting of CEOs from top maritime organisations and some of the region’s most influential personalities.

The Seatrade Maritime Awards is the largest networking event for the region's maritime industry leaders and influencers. It is a celebration of quality and industry-leading credibility, which brings forward companies that are keen to share their accomplishments and successes throughout the year.

In 2018, Kanoo Shipping won the coveted ‘Ship Agent of the Year’ with the award accepted by Kanoo Shipping EGM Jonathan Bygrave, including the company’s head of commercial Nikolai Norman. Last year’s event was held at the Atlantis the Palm, in Dubai, UAE, and attended by members of the management team.
Kanoo Shipping, a member of The Kanoo Group, is the largest regional shipping agency in the Middle East which operates in 20 countries and all principal ports and offshore tanker loading terminals around the Arabian Peninsula, including Iraq. Furthermore, Kanoo Shipping handles 20,000 ship calls every year through its professional network which covers all ports in the Suez to Sri Lanka range and East/South Africa and recently has launched operations in India. The new agency office in Mumbai, Kanoo Shipping India, will allow Kanoo Shipping to have complete port coverage in India.

Kanoo Shipping is the first Arab shipping agency in the region in 1911 and one of the founders of S5 Agency World Ltd.