Dubai, UAE: Kanoo Machinery honored three outstanding performers for 2012 in the 5th Parts Meeting held on 29th May 2013 in its Jebel Ali new facility. The awards ceremony, recently integrated as part of the program was one of the highlights of the event which gathered team members of the Parts Division from various branches.

This regular meeting aims to address related issues and to discuss group performance and achievements. In addition, it also gives recognition to top performers of the year which contributed a lot in the success and development of Kanoo Machinery.

Afroz Mujawar won the “Parts Employee of the Year 2012”. His key achievements for 2012 were as follows: Sold and liquidated DIG DOG buckets which were non-moving items for many years; achieved maximum growth in Parts sales (34%) and uptrend sales in all franchises; provided trainings/mentoring and contributed a lot in general in building a successful Parts team in Abu Dhabi.

Maryam Talib received an award for her outstanding customer service performance for 2012. She excellently handled heavy load of parts inquiries from customers; provided fast and accurate sending of quotes to customers; at times has sent more than 40 quotations to customers in a single day; ensured that customer queries were timely attended to and responded to without any delay. In general, her performance resulted to increase in overall smooth, efficient and precise production of customer service Parts team in Dubai.

K. Gopinath was also granted with exceptional “Service Award” for his loyalty, commitment and dedication in the service for 35 years. He has been an important constituent in building the Parts team since he joined in 1977.

Mr. Bob Jennings, General Manager of Kanoo Machinery, during his opening speech, presented a Vision for Kanoo Machinery which served as an advice and guidance in realigning plans and future actions. He also mentioned that Parts team has emerged as one of the best teams in Kanoo Machinery Division.

The 5th Parts Meeting concluded with review of actions and results embarked for the year 2012 and discussed upcoming objectives for Kanoo Machinery-Parts Division. 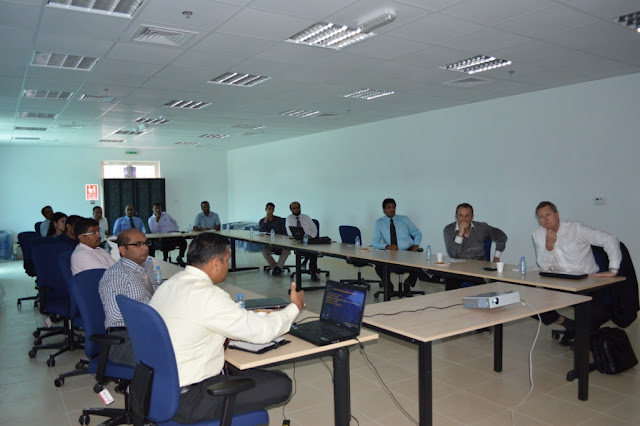 Kanoo Machinery is a member of The Kanoo Group, one of the largest family-owned conglomerates in the Middle East established in 1890. Since mid-1960s, Kanoo Machinery represents a wide range of leading international equipment brands/manufacturers within such areas as maintenance and construction, earth-moving machinery, cranes and material handling, power generation, marine power, airport equipment, welding supplies, safety and testing services, specialised equipment and services, agricultural equipment, industrial and automotive diesel engines and parts and workshop support services.

Kanoo Machinery has gained a considerable reputation as an expert solutions provider through its personalised service and dependability in delivering first-class machinery and equipment along with its associated support services to both Government and Private sector customers. The world-class products offered by Kanoo Machinery are backed by a strong and efficient after sales network of workshops, replacement parts and mobile service facilities throughout the Gulf and the Arabian Peninsula. Part of Kanoo Machinery, KANRENT has also been providing different equipment for short and long-term hire including lease.

‘The Kanoo Group’ is one of the largest, independent, family-owned groups of companies in the Gulf region established in 1890. It has diversified business industries in shipping, travel, machinery, engineering, logistics, property, oil & gas, power, industrial chemicals, training, joint ventures, retail and commercial activities, among others, and operates extensively throughout Saudi Arabia, Bahrain, United Arab Emirates, Oman, Yemen and Qatar.